Don’t Bet Against The Casino: Why Even Startups In Healthcare May Have A Bright Future During A Recession

In the midst of an economic rollercoaster and funding scene for digital health that has changed dramatically and founders and investors alike are trying to read the tea leaves while the scene goes blurring by, natural questions are raised: do we know where we are going, and how long it will take to get there? Is it better to focus on growth or profitability?

Just two years ago, founders, investors and analysts were exclaiming that a silver lining of Covid-19 was that it had driven digital health “10 years ahead in 10 months.” Accordingly, funding for digital health increased, reaching $14B in 2020 and then $29B in 2021. Entering 2022, it seemed the good times would continue rolling, as many investors, analysts and founders were bullish on the immense opportunity for digital health to address structural and symptomatic issues around quality, access, cost, and patient experience. 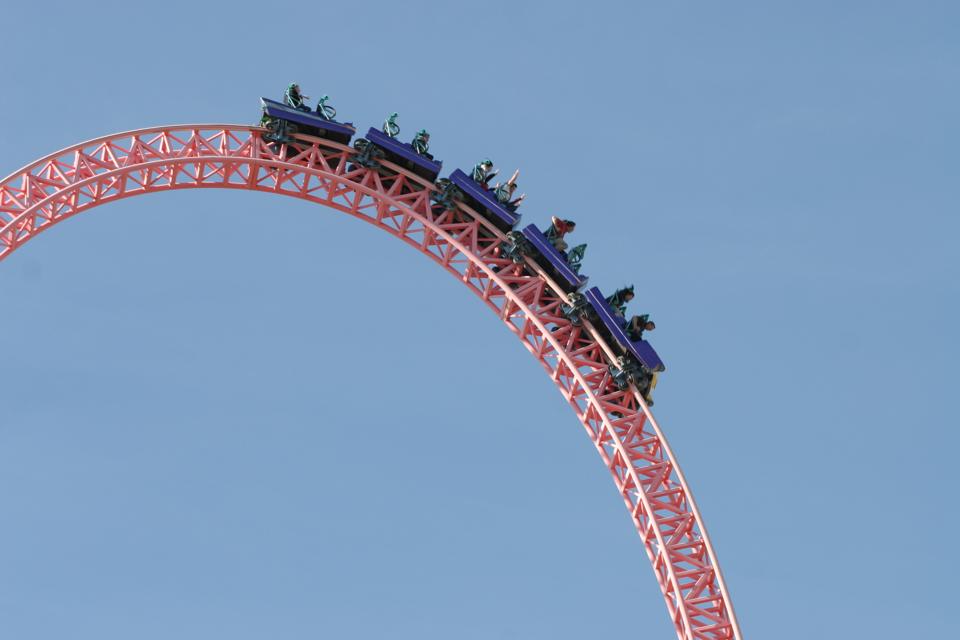 The past several months have been a rollercoaster of economic news

Several months later, how things have changed. Continued impact from the pandemic, war in Ukraine, global supply chain disruptions, and inflation have led to significant macroeconomic uncertainty and a corresponding drop in investor sentiment: the S&P is down 17% as of this writing. Healthcare has been affected as well: healthcare stocks overall are down more modestly (although nothing seems to stop UnitedHeath Group), and a group of new publicly traded digital health companies have taken a steeper hit, down 34% YTD.

The downturn to financial markets, and the very poor performance of digital health shares post-IPO, has begun impacting venture capital and early stage funding for digital health as well. Flare Capital’s Michael Greeley recently noted, “Very clearly venture investors have tightened the reins. While there continued to be strong interest in early-stage private companies, investors appear to be providing shorter runways.” And data from Rock Health shows a 27% year-over-year drop in 1H funding for digital health; at $10.3B across 329 deals, it’s a level of activity still higher than 2020, but markedly down.

Economists, investors and analysts are divided as to whether we’re headed toward a recession (or even if we’re already in the midst of one). If we are, what does that mean for healthcare providers, the healthcare industry, founders seeking to build a better future, and investors?

Of course, no one can answer this with any degree of certainty. But recalling the proverb “Those who do not learn from history are doomed to repeat it”, it can be instructive to look at our recent history: what does the data tell us about how healthcare was impacted - in terms of overall spending, funding levels, and sector financial performance - during the Great Recession?

What Happened At The Highest Level: Looking At GDP and NHE

The trigger for the Great Recession may have been in 2007, but it was in 2008 that real GDP turned negative, bottoming out in 2009 at -2.5%. The rate of growth for National Health Expenditures (NHE) declined but stayed positive over the same period of time (chart 1). Which is to say that health expenditures continue to increase each year, despite the broader macroeconomic environment of uncertainty and reduced consumer spend. 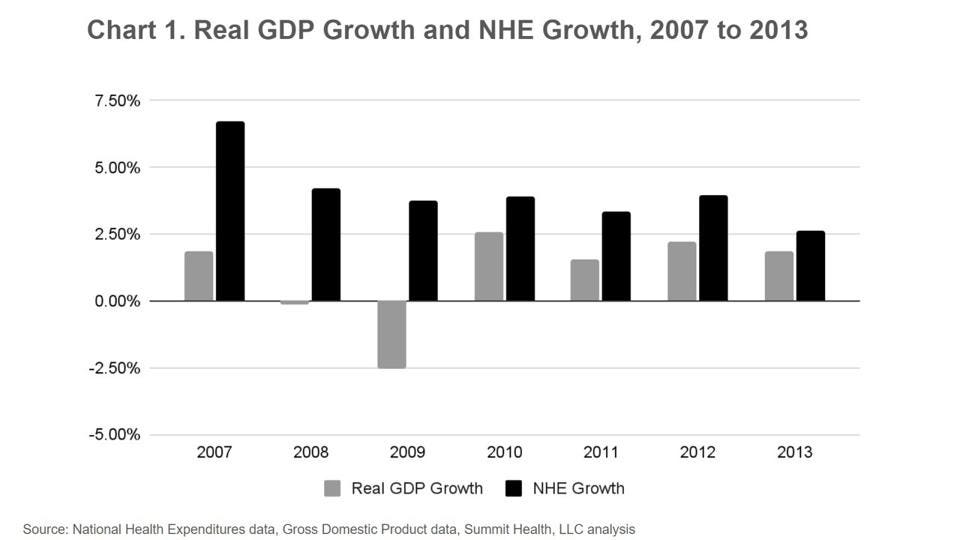 Looking a bit further back to 1960, one sees that negative annual GDP growth occurred eight times; but there were no corresponding periods of declining expenditures for healthcare. In fact, in seven of the eight years of negative GDP growth, there appears to be a spike of healthcare spending (chart 2). 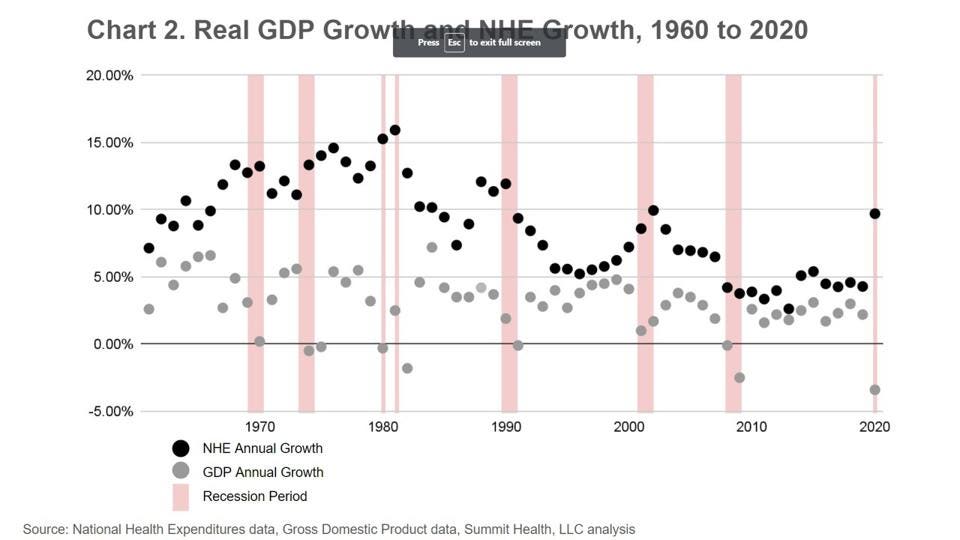 Healthcare spend has jumped during 7 of the past 8 recessions

It seems that if the US economy is a fairly predictable gambler and wins over time but occasionally stumbles, the healthcare industry is the casino: it never loses.

What Happened To Providers And Healthcare Consumers During The Great Recession

As described above, during the Great Recession, spending on healthcare continued to increase despite negative economic growth, job losses, and consumer uncertainty and stress. Perhaps not surprisingly, then, healthcare was one of the only sectors of the economy that saw a net increase in job creation from the end of 2007 into 2010. In fact, reports suggest that one side effect of the spike in demand for healthcare workers was a lack of qualified practitioners, resulting in the expanded use of locum tenens (temporary) providers.

While the going was comparatively good for the healthcare industry, however, for consumers, it was traumatic and decidedly unhealthy.

As employers laid off employees, people who previously had employer-sponsored insurance found themselves uninsured; accordingly, the uninsured rate leapt from 16.6% in 2007 to 18.5% in 2010. Other ways the Great Recession impacted the American public from a healthcare perspective included:

Ironically, of course, all of these factors are associated with higher healthcare costs, adding stress and causing immediate or downstream increases in cost and acuity.

Healthcare companies’ financials experienced a bit of a roller coaster during the Great Recession. While stock performance took a massive hit, different sectors were impacted differently, and at different points in time. Most notably, however, was that healthcare companies’ revenues and profitability (as measured by EBITDA) continued to increase – despite people delaying medical care during that same period.

In terms of sector differences, health plans and healthcare technology companies saw the biggest impact in stock price and took the longest to rebound (see bottom for all companies included in analysis). Payers’ stock performance dropped the most – by ~72%, hitting a low in December 2008 – and took the longest to recover. This activity can likely be attributed to two major factors: first, payers have more exposure to financial markets, given they are insurance orgs; and second, there was substantial uncertainty about how health reform and subsequently the Affordable Care Act (ACA) would impact health plan business. As it turns out, there was not a substantial impact from either (at least not negatively): revenue grew organically, consistently and steadily from 2007 to 2013, while EBITDA dropped by 21% in 2008 but fairly quickly recovered (chart 4 below). 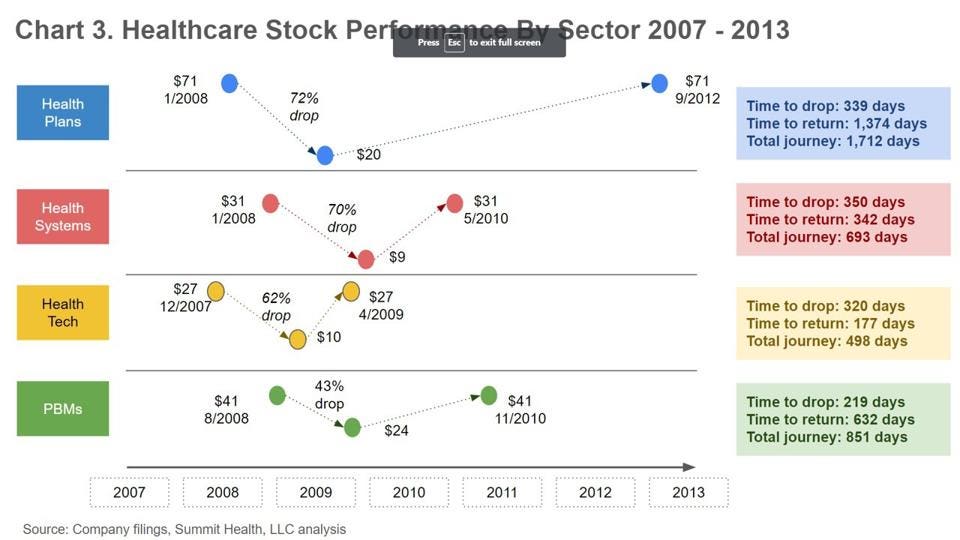 Healthcare stocks were not immune to the Great Recession, dropping as much as 72%

On the other hand, healthcare delivery organizations and healthcare technology companies’ share prices rebounded the fastest. In both cases, policy and the axiom that healthcare is ‘recession-proof’ may have played a role. On the policy side, the ACA fairly clearly was going to have a positive effect on patient volumes for healthcare delivery organizations, while federal subsidies in the form of the EHR Incentive Program (passed as part of 2009’s American Recovery and Reinvestment Act) was expected to catalyze market demand for EHRs. (Which it did, with ultimately mixed results). 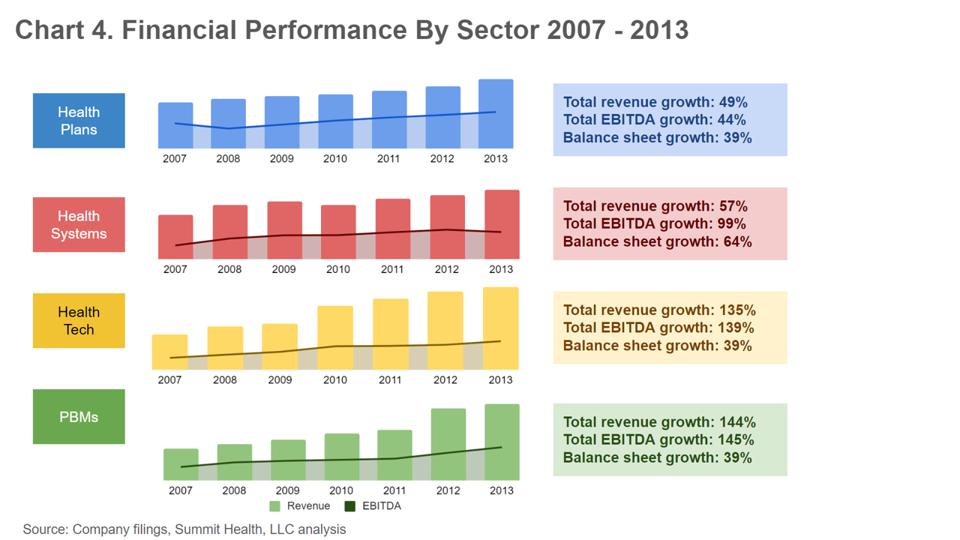 Every healthcare company in the analysis and across each sector grew organically through the Great ... [+]

It’s important to note – and a testament to healthcare’s casino-esque position – that none of the four sectors evaluated – payers, healthcare delivery organizations, healthcare technology companies, or PBMs – saw negative revenue growth or took a profitability hit of more than one year.

What Happened To Startups and Capital During the Great Recession

Like its much larger parent industry, the digital health sector proved that it was more resilient than non-healthcare industries, with investment sentiment returning sooner and rising more quickly during the Great Recession. After its initial ~17% drop from 2008 to 2009 (going from $1.77B to $1.5B), digital health investment had almost completely rebounded by 2010, reaching $1.76B. In comparison, broader VC activity in the U.S. dropped by 30% from 2008 to 2009 (from ($46B to $32B) rebounding only in 2011 at $52B (chart 5). 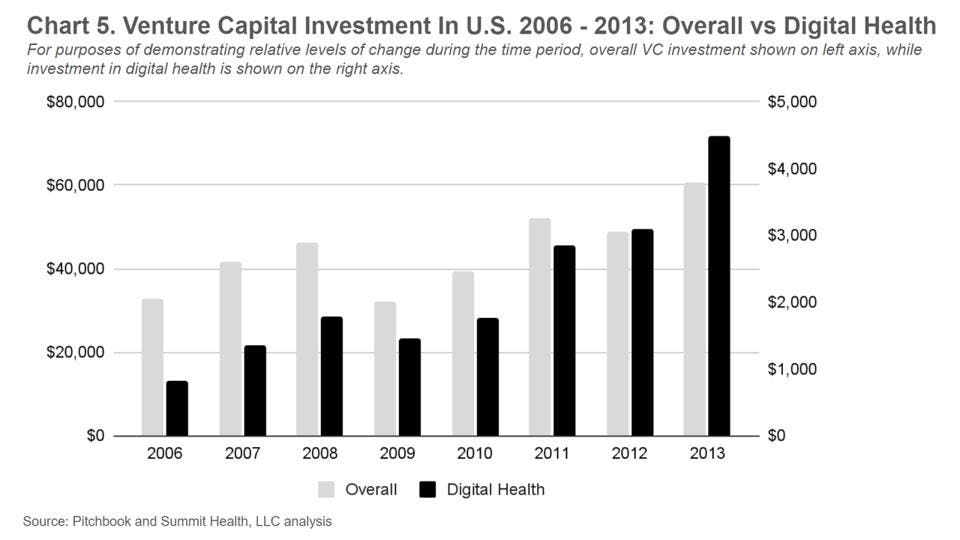 And though the size of deals were smaller (not shown), total deal count for the healthcare technology sector continued to rise from 168 to 1,297. Enthusiasm for the sector remained high during that time, likely due to the announcement of the HITECH Act and the millions in federal subsidies going into EHRs and the digitization of the industry as a whole. The stimulus act also gave a boost to publicly traded companies like Cerner and CPSI during that time. The key takeaway here is that what the government and policy makers decide to do has a huge impact on a company’s share price and consumer sentiment, as well as how businesses operate.

Fast forward to today, and it’s normal to wonder how much further digital health investments will tumble compared to the financing hey-dey that was 2010 to 2021. Rock Health is already predicting that 2022 digital health investments will come in at a “meager” $21B, a decline of 28% from the $29B that was invested in the sector 2021 – more than the drop seen during the Great Recession more than 10 years ago.

There’s also been a lot less bullishness on the growth potential for certain healthcare technology segments, like telehealth. McKinsey’s early pandemic projection for telehealth’s potential market size was a lofty $250B. Earlier this year, however, Bloomberg had a far more conservative estimate – $20B – for telehealth’s potential market size. This rapid rebalancing of financial and demand expectations shows how important it is for healthcare company leaders to look beyond the headlines and dig into the numbers to plan for reality.

That said, it’s important to recognize that the country’s health IT infrastructure is far more advanced than it was during the Great Recession, and the opportunity for technology and policy to continue driving digital health investments is great. Despite where numbers stand in 2022, and the cooling off of certain overly hyped tech sectors (i.e., telehealth) there are many reasons to be optimistic about both the short and long term for the digital health economy.

So, has the digital health sector hit bottom, or can we expect to see the investor market pull back even further? It almost doesn’t matter. The pace may have slowed, but digital health funding will continue – and if 2022-2023 is anything like the healthcare economy during and after the Great Recession, it is likely to rebound fairly quickly (if it hasn’t already). After all, while healthcare share prices and investment may have dropped during the Great Recession, demand for healthcare services - and resulting revenue for companies in all sectors - continued growing throughout, something we might expect to see in the future.

And while there have been a number of layoffs in the digital health landscape in recent months, this isn't necessarily a bad sign. Most of these companies are likely aiming to best position themselves for capital in the future by rightsizing their staffing models and better managing their balance sheets. Layoffs from companies that raised too much (or too little) may also mean that the best positioned companies can attract that laid-off talent – again, not a bad thing for businesses coming out of a downturn.

In summary, no matter where you sit in the healthcare industry, now is the time to:

The Road To Recovery

Although healthcare has begun to see an economic downturn in 2022, the fallout from 2008-2009 was likely far worse than what the country will see in the present day.

If the U.S. economy is a casino, then healthcare is the house. And you don’t bet against the house – you find ways to make it work in your favor.

London UK 9.00 AM 6th December 2022: Vinehealth, the leading digital oncology company that is transforming life with cancer through technology, and Cancer Research UK (CRUK), the world’s leading cancer charity dedicated to saving lives, have formed a partnership to better support people living with cancer. Together, they will provide cancer patients access to expert supportive information, as well as enable them to better track, manage and understand their care through the Vinehealth digital app.

GRC will partner with Carbon-Z, The Halston Group, The Data Shed, and Proact to discuss this data centre solution and its impact on the rising costs of power which pose a serious challenge to healthcare and the NHS