By Teresa Murray, freelance writer for Healthtech and for Giant Health

Melanie Peron is no stranger to pain. A migraine sufferer for years, she tried everything from drugs to alternative therapies, all to no avail. Yet, it wasn’t her migraines that set her on the quest to alleviate pain and suffering for patients everywhere. Instead, it was tragedy and having to witness first-hand the extremely invasive and painful treatments that her partner of 12 years had to endure to treat his leukaemia.

Melanie, just 29 at the time, was informed by the medical team that half her partner’s care would be quality of life care, which would fall to her. The remaining half was drug treatments, chemotherapy, radiotherapy and bone marrow transplants.

During those terrible years, Melanie spent considerable time in the hospital. Her partner was kept in a sterilised room for 18 months. Not even a window could be opened for a breath of fresh air. He suffered greatly, she suffered too, watching someone she loved deeply in constant pain.

The experience dramatically changed the course of Melanie’s life. She was determined to do something that would help make sense of her loss and transform her feelings of frustration and helplessness into some sort of action.

But what could she do?

That same year, she saw the film Avatar and got her answer. Inspired by the film, she decided to create an Avatar-like world for patients like her partner, suffering from serious illnesses requiring painful, invasive procedures and treatments.

Mélanie, a librarian, didn’t fit the usual profile of a tech innovator, and knew nothing about virtual reality. But armed with a clear vision and mission she forged ahead regardless. Back then, not many believed in her vision. Most thought she would fail. Their voices fell on deaf ears though because for Mélanie, the real failure would be to do nothing.

In the later phase of her partner’s leukaemia, feeling desperate and hopeless, Melanie wanted to do something to uplift her partner but was limited by the confines of the sterile room.
Passionate about music and convinced of its power to transport and transform, she invited the famous French singer – Bénabar -  to play for her partner.

She never thought he would come but 4 days later there he was there in the hospital room, playing his hit song at the time – L’Effet Papillion (The Butterfly Effect) to the joy, and disbelief, of her partner.

And for a short time the tragic reality was suspended.

That’s why Melanie’s called her company L’Effet Papillion, that and her firm belief that small acts can have large, positive effects.

Melanie’s idea was to combine music and images to produce a 360º Virtual Reality immersive experience that would alleviate patients’ pain and anxiety during difficult or painful procedures. The planets aligned because the place where she lived at the time, Laval, France, had invested heavily since the late 90’s to create a vibrant and innovative virtual reality hub –Laval Virtual – where a rich mix of designers, researchers and tech people converged.

Mélanie enlisted their help. Then, in 2011 she travelled to Canada to meet Dr. Stéphane Bouchard, a pioneer and leading expert in the field of therapeutic virtual reality, who had been using virtual reality to treat phobias and anxiety for over 20 years.

Melanie calls Dr Bouchard her Jedi master. He advised her that if she was serious about her device being used in clinical settings, she would have to take the more rigorous clinical route,not the gaming one.

Undeterred, she returned to France and set up a scientific committee to ensure her virtual reality therapeutic device would be safe and effective for use in hospitals and clinics and adhere to ethical frameworks.

To design the prototype, Melanie and the design team spent hundreds of hours in hospitals observing procedures and talking to patients and health teams. They understood the importance of co-designing the device with all kinds of patients and health care teams in real clinical settings.

Once the prototype, Bliss©, was ready, the scientific committee designed the first clinical trials to be carried out during bone marrow biopsy, an extremely painful and uncomfortable procedure. It was fitting that the clinical trials focused on this particular procedure because
Melanie had witnessed the pain and anxiety that bone marrow biopsies and other invasive medical procedures had caused her partner.

The standard of care for the procedure is the local anaesthetic lidocaine combined with gas administered through a face mask worn by the patient. The Bliss© clinical trial was designed to compare that standard of care to the combination of lidocaine but using the Bliss© Virtual Reality device instead of the gas.

The results showed that Bliss© was as at least as effective as the standard of care and marked an important turning point for Melanie’s innovation. Melanie and her scientific committee have since designed rigorous phase 3 randomised control trials carried out in 5 hospital settings, all showing the same efficacy.

In fact, both patients and the oncology community are more satisfied with Bliss© than the standard of care and the World Oncology Congress recently endorsed and published the clinical study.

More than 10 years have passed since Melanie was first inspired by Avatar. Bliss© has now been used for 3 years in over 80 hospitals and nursing homes in France for any procedure involving pain or anxiety. Not only biopsies, but also painful wound cleansing and dressings, stitches, traumatic injuries and other invasive procedures.

Pregnant women are also benefitting from Bliss©, which has been found to reduce contraction pain intensity by 3-5 points on a pain scale.  Bliss© literally takes pain and anxiety away, the only side-effect is a feeling of utter Bliss!
Melanie tells the story of a friend who used Bliss© instead of a general anaesthetic for his hip replacement surgery. Instead of pain, he experienced a wonderful immersion in meadows and forests, transported there by beautiful music. Not only did he feel no pain throughout the procedure, but also because he had been awake the whole time, he required hardly any post-op observation.

Simplicity lies at the core of the device’s design, Mélanie and her team never lost sight of the users throughout the whole design journey. Bliss© has just one simple button which turns the device on and selects the programme and duration of the images and music.

It doesn’t even require an internet connection!

This is pragmatic user-centric design at its best. All that time spent in hospitals and other clinical settings paid off in revealing which barriers to eliminate in the design.
Requiring a data connection would have been a major barrier for most hospitals, clinics and nursing homes.

Also, there are no words in the virtual reality programmes either so potential linguistic barriers for users have been removed. This means no need to invest in costly, time-consuming translations. Anyone can use the device, from small kids to the elderly, including those with
physical or neurological limitations.

Maximum accessibility was of supreme importance to Mélanie from the start, she wanted to create something for anybody, anywhere, not just available to the privileged few or stocked only in the most expensive hospitals.

But why did she call the device Bliss©?

The dictionary defines Bliss as a state of complete happiness, so that was part of it. But that’s not the only reason it’s called Bliss.

Melanie has a musical muse - the British band Muse. She named the device after their song Bliss. Not only is she a huge fan, but she is also determined to get the band to collaborate on her innovation!

Given Melanie’s drive and determination in taking her idea from zero to the ultra-bright future awaiting her device, it’s probably just a matter of time before she persuades the band!

For now though, Mélanie and her team are focused on getting Bliss© into hospitals and clinics beyond the French health care system, and have set the goal of putting the device through several more successful clinical trials by 2025. To achieve these goals, Melanie’s company needs funding but Melanie is not worried. After all, Bliss© has solid clinical proof and is already being used extensively in clinical settings all around the country.

The device has picked up a few awards along the way too.

For Melanie, it’s never been about making a ton of money or building a digital therapeutics empire. It’s always been about taking away people’s pain and she is determined to make the solution available for millions across the globe.
As is often the case with innovations, things look easy when we see the finished product, but innovation is a long and tough path and for a long time Mélanie battled alone. But battle she did.

What she and her team have managed to do is both inspiring and transformational. To take away pain is such a powerful achievement and no doubt their device has the potential to transform perspectives for pain management in clinical settings for millions of people. 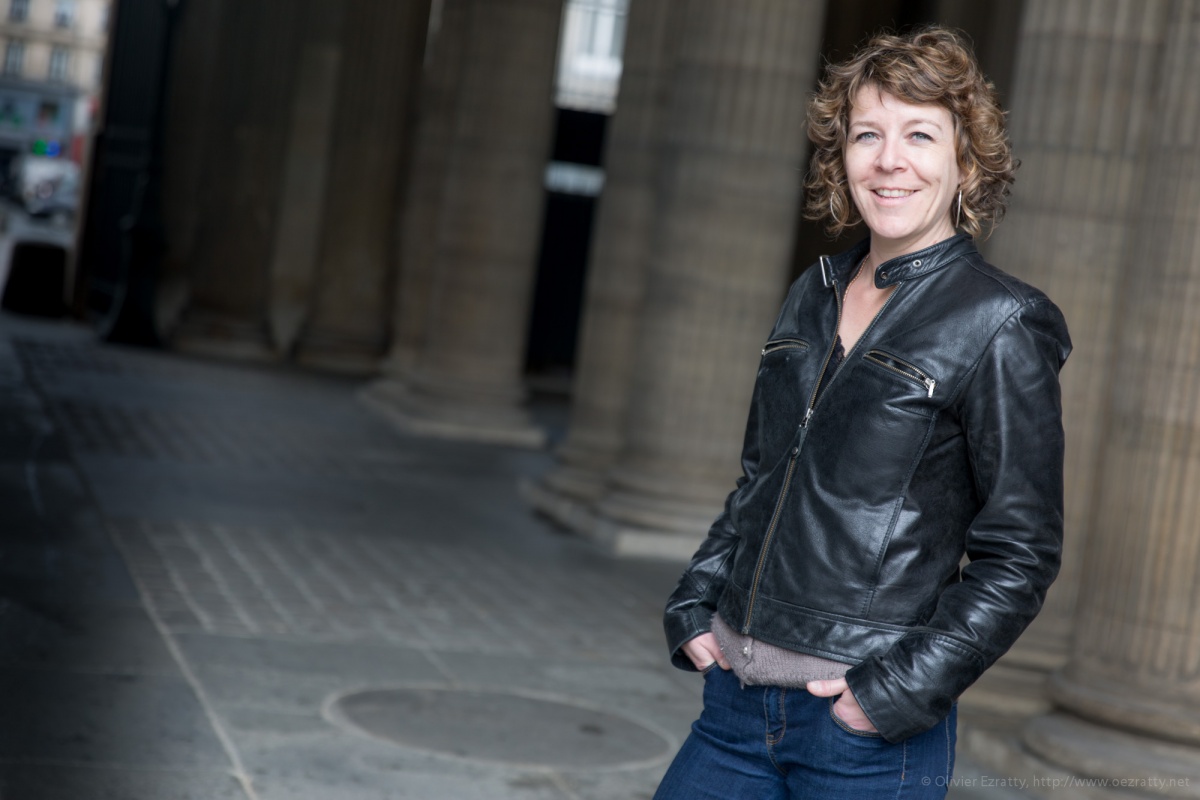 By Teresa Murray, freelance writer for healthtech and writer for Giant Health. Few among us will have escaped the curse of sleepless nights, when unless adrenaline courses through our veins, one is at best sluggish and somewhat out of sorts…

Four of Kamet Ventures portfolio companies have been named to The DIA Community's Top 250!

Congratulations to Air Doctor, AKUR8, Anorak and Setoo now known as Pattern on their selection and inclusion among 250 of the most impressive, inspiring and impactful #insurtechs! Read more here.